It all started with Tiramisu. Well, almost. The truth is, the Italian cake was only one of the many things that forged our friendship… I still can remember the moment: I was amazed by the biggest Tiramisu I’ve ever laid eyes on, a masterpiece created by my friend and“celebrity” (in his own right) pastry chef, Ed.

Ed and wife Vicky are pastry chefs. Both have worked at Walt Disney World Resorts.  Our paths crossed through my sister who met the adorable couple in a serendipitous manner. At the time, my sister Marvie and her husband Benedict recently moved to Orlando and exchanged pleasantries with Ed and Vicky in a restaurant. They swapped contact numbers only to find out  later  that one of Ed’s friends visiting from London is Benedict’s cousin. A year later, Benedict’s cousin and his family migrated to Orlando. That‘s how our group of friends was formed… We had a lot of fun during those nights of playing poker and charades while enjoying good food and wonderful company. And it was only through, as I’ve said, a fortuitous meeting in a hole-in-the-wall joint. Serendipity!

So what makes friends click? It’s just chemistry, sharing things in common, and enjoying each other’s company. What was initially a casual meeting turned into a deeper friendship, sharing similar values, interests, our passion for good food, and yes our love for tiramisu!

We would meet up almost every weekend until Ed and Vicky moved across the country to Seattle. A few months later, we moved to San Diego, but the bonds of friendship we formed in Florida have outlasted the distance and time…

I got a call from Ed saying that they were visiting San Diego. Again, what impeccable timing as my sister’s family was scheduled to arrive the same week for my daughter’s graduation… and so last weekend we had a chance to revisit what we had before in Orlando. We got together like the good old days… We laughed as we recited the names of who were the best (and worst) players in charades, the songs we loved to sing, as we talked about how our kids have grown so fast, and yes, how we would want all this again… We may not be able to do it as often but we will schedule it for next year, hopefully in Seattle.

Ed will always be the “leader of the band" as he loves to organize our parties… the random movie titles he would give that were impossible to get in charades, our theme parties he would come up with that were always fun, and of course the delicious dessert that he and Vicky always prepared. I asked him what the theme of my menu for his visit should be, he said nothing but healthy food... My a-ha moment came... as I thought out loud “SEAFOOD”. The recipe in this post is one of the dishes  I prepared that night..

Yes having chefs as close friends has its benefits but on the other hand having them come to dinner is quite intimidating... but  that night  Ed and Vicky gave me a rating of 5 star (***** wink wink)... yeah that's what friends are for.

Shrimp with Tofu
This dish is so simple and light. And it’s easy to prepare. 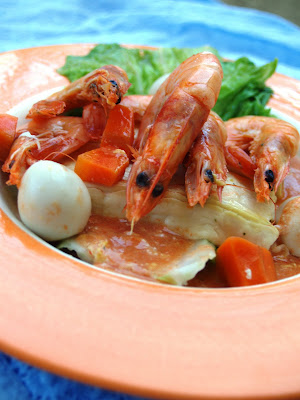 Directions:
In a saucepan, pour the soup stock. Drop the tofu slices. Let it boil. Set aside the tofu when done.

In the same broth, put the carrots, celery and quail eggs. Let it simmer. Add the shrimps. Cook until shrimps turn bright pink. Do not overcook the shrimp (cooks in a few minutes, usually no more than seven minutes if thawed). You may add 2 tsp of cornstarch dispersed in water  to slightly thicken the sauce, and add a few drops of sesame oil.

It's that easy and to think that this was one of the favorite dishes of the night.
Cheers! 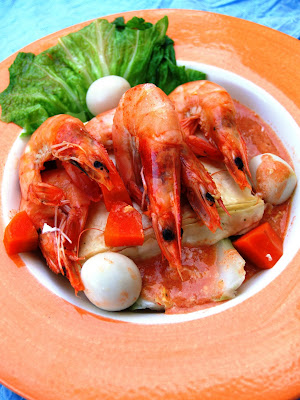 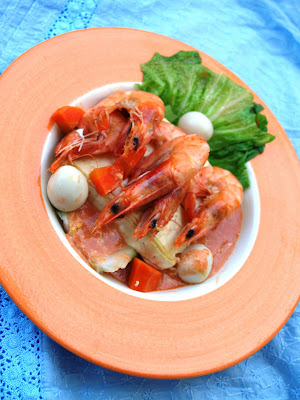 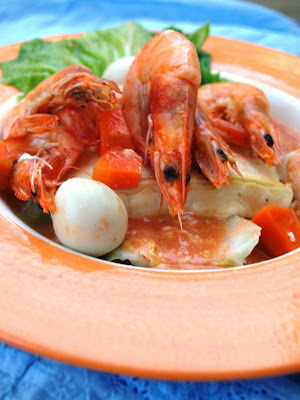