I was invited to audit a short pastry class at Kitchen Conservatory a few weeks ago, and since then, I've been wanting to give my pastry making skill a try.  "Cold dough + hot oven = flaky pastry" said Anne, as the chef/owner/instructor's words ran in my head for days.

One of the recipes we made is Caramelized Tomato Tart and the savory tart left an indelible print in my taste buds.  The vinegar in the recipe reminded me of a vegetable stew that is an iconic dish in any Filipino home.  The veggie dish is called pinakbet.

Later that week, a cousin of mine, Erick, shared a pic of Pinakbet Pizza.   And this picture plus the pastry making class gave me an A-HA moment.

I want to make a Pinakbet Galette, came the idea.

I played with the flavors of the traditional pinakbet and used it as a filling for a galette.  I selected to make a galette because it's not as intimidating as making a beautiful, but dangerous to make (as in easy to fail), savory pie.  I blame Martha Stewart for making picture perfect pies, now I'm afraid to even try!  But making galettes is fun... as it is more forgiving.  It gives you a free hand on how to form your crust.

Pinakbet Galette may sound novel, or even bizarre to some.  But before you raise those eyebrows, why not give it a try.  Taste it and tell me how you like or dislike it.  We'll have fun... trying something new.. and make our own take on combining an iconic Filipino vegetable dish with some pastry goodness. 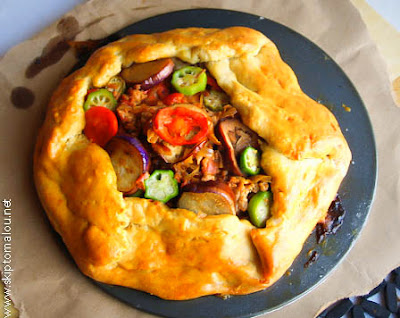 Procedure:
Pre-heat oven for 350 degrees.
Crust:
Mix together the flour, sugar and salt.  Add the butter cubes and mix it together.  Add in the eggs and form a ball.  Pour a little water if the dough is not holding together.  (note: water should be ice cold and pour just a little like a spoonful) Refrigerate for at least 30 minutes.

Filling
In a saute pan, pour olive oil, butter, onions (put them altogether to avoid burning.  The onions and garlic will be cooking while the butter is being melted). Cook for about 5 minutes until the onions become translucent. Add tomatoes.  Cook for about 5 minutes or until the tomatoes become mushy. Add shrimp paste and vinegar.  Add pork and cook for 10 minutes, stirring continuously to avoid burning.  Add olive oil if necessary.  Set aside.

Roll out the dough in a slightly flour coated surface.  Form a 12 inch diameter circle. Slowly lift it up and put it on a baking sheet.
Spread half of the filling onto the bottom layer.  Layer it with all the veggies.  Add the remaining filling and layer the remaining veggies. Fold the dough around the filling.  Coat the outer layer with egg wash.  Bake for about 30 minutes or until the dough turns golden brown. Remove from the oven and let it cool. 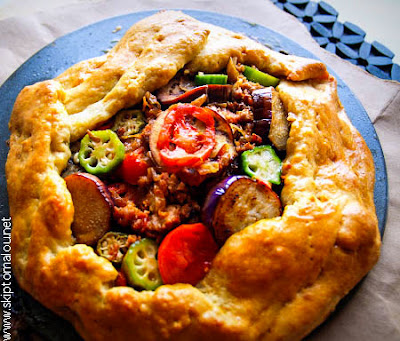