Despite the warnings of Carmaggedon, my husband and I headed north yesterday to attend my friends', Rowena and David's, party. The invite called for a celebration because Rowena just recently passed the NCLEX exam, a board exam for nurses. (By the way, congratulations Rowena! I was so overwhelmed by all the fun we had yesterday that I don't remember congratulating you!) With Rowena becoming a nurse, after already being a flight attendant and also finishing a law degree in the Philippines, not even the scare of Carmaggedon could stop me from celebrating my friend's new triumph.

"Can you cater for the dessert?" Rowena emailed me. To go with the long menu of dishes that she was going to prepare, I decided to make two desserts: one of which I will share today and the other in a later post.

But that's getting too far ahead...
As I mentioned before, it was Carmaggedon right? Of all the deserts I could have made, I went with a Pina Colada Icebox Cake; a cold desert that would pose problems if we indeed ran into the heavy traffic of Carmaggedon. The entire time we were stuck in traffic, I fretted about the disastrous scenario that would pursue if the icebox cake melted. Fortunately, it was only slightly melted by the end of the car ride. As a food blogger, catering is risky. But I was tickled pink when I heard people at the party rave about my desserts. Compliments, just like comments from this blog, are like drugs to us bloggers. It gives us a certain high!  LOL! Although I did miss the moment when the host, David, complimented me. I was too busy tinkering with my phone when he said his kind words. I asked him to repeat what he had said, but he merely replied by saying that the moment had passed! But David: my husband shared with me what you said and yes, it was the best compliment of the night haha!
So while I was seated at one of the tables, enjoying the chats with my new friends named Pia and Dave, I heard the people at the other table talk about my dessert and, later on, my blog.
"Hey Malou, you're popular! Someone here has read your blog," Rowena jested.
That was the first time I actually met someone who read my blog without me having to tell them to haha. "So how did you know about my blog?" I inquired.
"My cousin recommended  that I read it," she said.
"Who is your cousin?"
"It's Sigrid," Mary said.
"Sigrid? Get out of here she is my sister-in-law."
We dashed across our tables and hugged each other like long time friends. "What a small world!" we both exclaimed. She was so excited to meet Skip to Malou in person. We both took snapshots and immediately posted them on Facebook for my sister-in-law to see.
Now let's see: Mary is married to Don who owns America-Healthways-Education where Rowena went for her NCLEX review class. The party was all about celebrating Rowena's NCLEX exam, which was why Don and Mary were there. And Mary is the cousin of my sister-in-law who lives in the Philippines. Now that is 6 degrees of separation. How fascinating is that! Oh and by the way, for those of you who are looking for a NCLEX review school, feel free to contact Don. Just think about it; Rowena passed the exam with their help!
Now folks before the story gets even longer, here is the recipe. And thank you, David and Rowena, for inviting us over. We enjoyed meeting new friends. To Sigrid, thank you for introducing my blog to Mary.
Pina Colada Icebox Cake 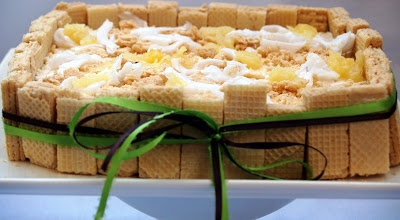 Ingredients:
1 can condensed milk
1 can Nestle's cream
1 bar creamcheese
1 know gelatin (dissolved in 3/4 cup hot water)
I cup shreds of young coconut
1 cup pineapple tidbits
1 pack of vanilla wafers
Procedure:
Use an electric mixer to beat the softened cream cheese.  Add  condensed milk and the table cream.  Mix well.
Meanwhile, dissolve gelatin with a boiling water. Make sure to do this quickly since the gelatin sets immediately.   Mix the gelatin to the cream cheese mixture and blend well.  Add  cocounut shread  and pineapple tidbits into the mix.
Pour in to your desired pan or tin.  I lined my pan with parchment paper to facilitate easy unmolding. Freeze until it sets.
Unmold the cake on a flat surface.  Add vanilla wafers around it.  Now crumb some vanilla wafers on top , add more coconut shreds and pineapple tidbits. 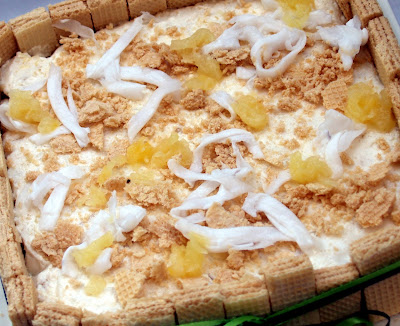 Put it back into the freezer or in the fridge until you're ready to serve them.  ENJOY! 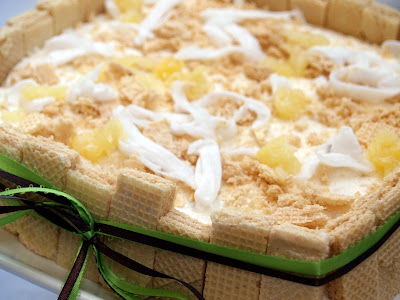