all aboard the reality train I: a toast to the graduate

Riding the Metrolink (the LA metro rail transit) is like watching reality television.  Like in most trains, the seating arrangement is such that you are face to face with other passengers, which makes it uncomfortable for me... well depending on who is in front of me.  As soon as I sit, I start noticing a variety of things: the people making their way home, the view of the ocean, the kids by the tracks waving at the train... I just love observing it all.

I watch the other passengers and I notice that some are train buddies and it seems like they are having a party, enjoying each other's company. I have learned to distinguish the commuters into the following:  chatter-bug - who chirps faster than the guy in the old FedEx commercials,  the techy - whose gadgets ranges from the latest i-pad to the wisest smart phone, the inconsiderate - who talks on his phone so loud (sometimes at worst in a different language) that the whole car notices and the pleasant ones - who always smile despite the long, hard day and even in between breadths from running to catch the train.


Last Friday, as I was enjoying a hotdog in a corner, I noticed a young lady in front of me who was busy texting. She was all smiles, even giggling after reading each text. Two stops later, she was joined by 3 "train buddies."
The three of them were carrying bags filled with decorations and goodies. One of them told the woman in front of me, "all you had to do was save seats for us."
Overhearing this, I offered to move but they insisted that I stay. They started taking out party favors from their grocery bags.  A lady started decorating the car with napkins with a graduation motif and a banner.  I offered my scotch tape and they all laughed wondering why I have a scotch tape in my purse (CALL ME McGyver). I started to feel like I was one of them.  They called me the "tape lady".
"So what's the story?" I asked (You know I am always being nosy).
The man in a khaki shirt explained, "we're trying to pitch a surprise party for our 17-year old train buddy who is graduating next week".
Soon, the car was very festive with banners, tables nicely covered  with table cloth, napkins, glasses, etc.  Later on, they were joined by another woman, then another. I began to insist again that I move at this point as I felt like I was crashing a party. And after two stops, the graduate walks into the car.  They all chorused,
"Surprise!"
The graduate was flustered.  She didn't know what to say. Then, the party started, drinks were passed around, food and laughter ensued. The lady tourist beside me said that she'd never seen anything like this in Japan... Yes only in America and this is by far the most unique party I've ever seen.
I took pictures from my camera phone (so pardon the grainy picture) as I just want to share with you. 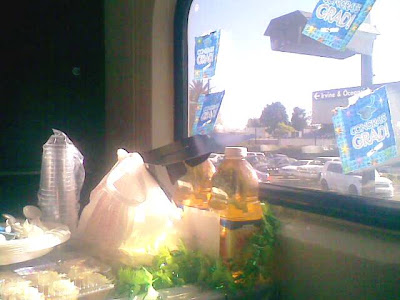 That's the table and notice the window taped with grad napkins... 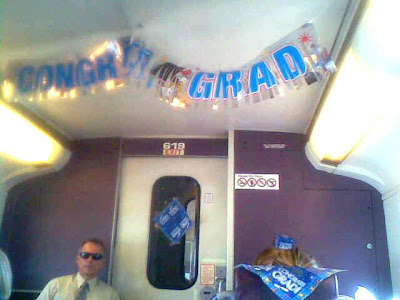 The banner...
As I reached my destination, I could still hear their laughter and their voices.  Not even the loud brakes and the train whistle could drown their voices.  What a heartwarming grad party and I was glad I was able to witness it.

In my home country, one of the most celebrated occassion is a graduation party.  Lechon (roast pig) is a  party staple. It could be the whole lechon or the miniature version, which is called lechon kawali (roast pork belly). And this is what I'm going to share with you in this post. 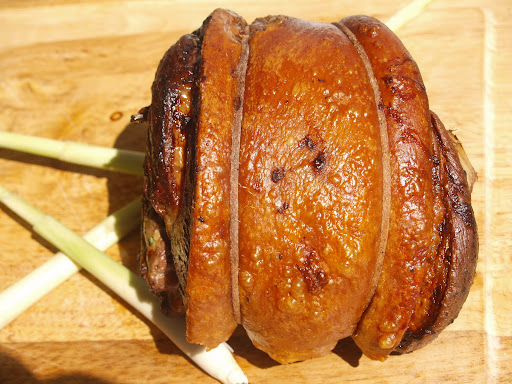 Lechon Kawali (Crispy Pork Belly)
Most of us dread frying, especially large chunks of meat. So I cooked the pork belly in a turbo broiler, so it’s sans frying (a healthier way to cook Filipino food!) 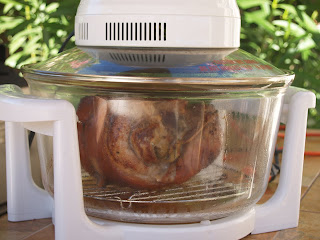 Boil the pork and throw in some bay leaves and peppercorns to add more flavor. Boil it for about an hour or until the skin is tender. Some hang it to dry. I just put mine in  the refrigerator until I am ready to cook it, usually the following day. Make sure to bring the pork out an hour before cooking.

Now here’s the twist. Usually back home, the pre-boiled pork gets submerged in a pot full of oil and deep fried on high heat. That’s why it’s called  Lechon Kawali coming from kawali which is pan or wok. But I am not too keen on deep frying, not just because of health issues (as if the pork belly is healthy-- haha!) but because of fear of oil splattering and me having to call 911…
Bake it at 375F in an oven, or in my case, the turbo broiler for about an hour or until very crispy. When you hear the skin crackling, voila, it’s done! I didn’t have to slave away to satisfy my cravings.

Let it cool before chopping. You could enjoy your crispy pork belly with your favorite dipping sauce but my favorite is vinegar and soy sauce with chopped onions and garlic.  ENJOY! 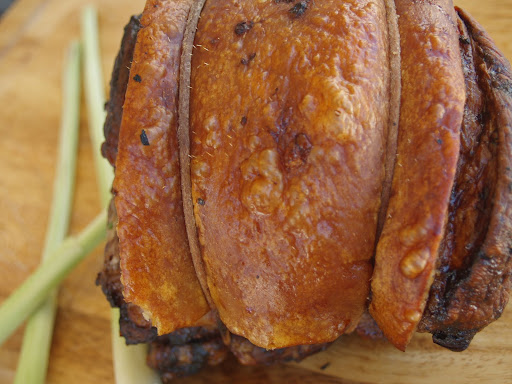