As a child, I loved visiting the farm.

My late father would bring us to the farm on weekends to immerse us into "farm life."  But now that I am in the business of food writing, to experience "farm life" again brings it to a different realm.

"They just gathered dozens of baskets filled with guavas and we are going to make guava jelly, would you like to come?" asked Tita Bess (my brother-in-law's mom) one morning.

The invite appeals to me. I have featured Tita Bess previously, here and here. She's a great resource, especially for heirloom recipes. I appreciate  her generosity  to share the process of how their family's heirloom guava jelly is being made. At the same time I am excited to visit my brother in law's farm, which he tended to before migrating to the

The winding dirt road takes us to a vast farm blanketed by a green carpet of tropical trees:  mangoes, santol, guavas. We were greeted by two large vats filled with simmering guavas. Each vat, filled with a boiling mixture of yellow and green guavas, was a sight to behold. Like golf balls swimming in a large vessel full of water, the air quickly fills with the sweet aroma of guavas. And with the sound of the crackle of the blazing firewood and the rustling of water poured into the vat, I start my immersion to this charming "farm life". My senses are overwhelmed. 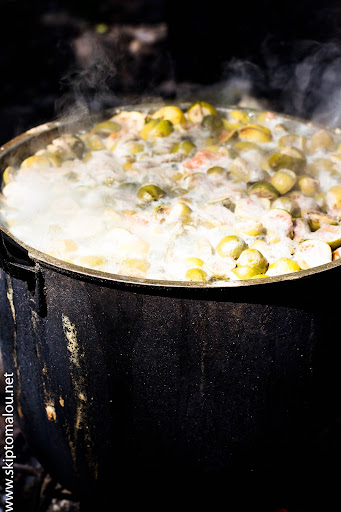 The vat has been simmering for 3 hours when we get there.  We arrive just in time, as they are about to strain the guavas. 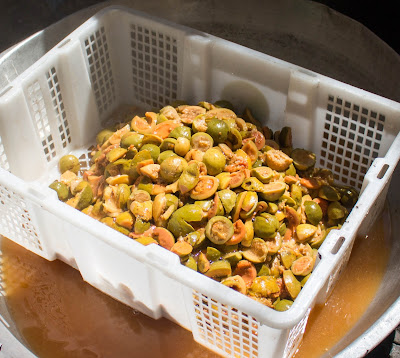 Then a second step of straining is done, until the guava extract is free from seeds and other particles. While this is done, freshly picked calamansi is also being juiced. 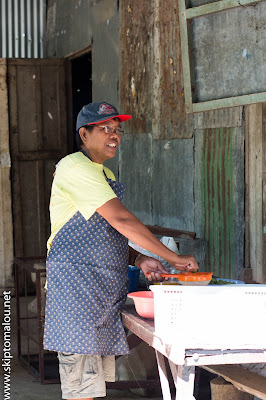 The guava extract is poured to another vat, sugar is added along with calamansi juice. 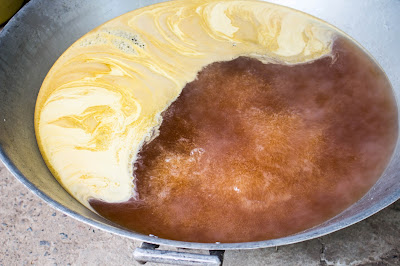 And we watch patiently, as the guava extract turns into jelly over a period of three hours. 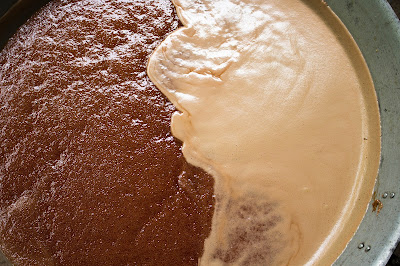 So three hours gives me the chance to know the members of the crew...

Meet Dummo, I call him the silent worker. 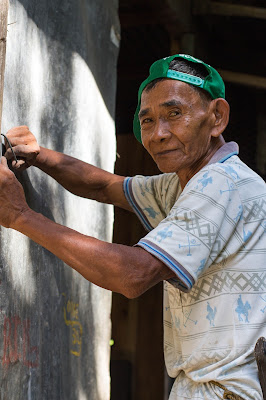 This is Tinong... he's been with the clan for ages... I call him the loyal worker. 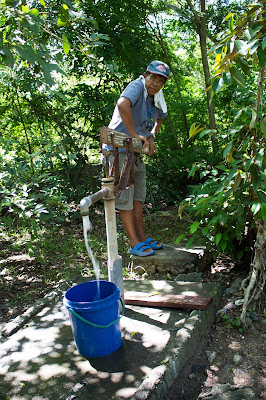 And this is Fer, the master mixer. 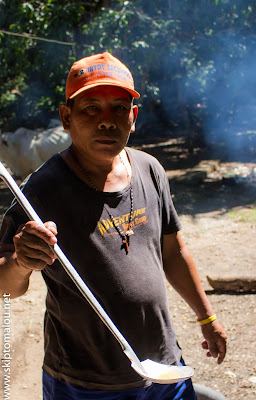 Three hours may seem long, but I am distracted by the charm around me... 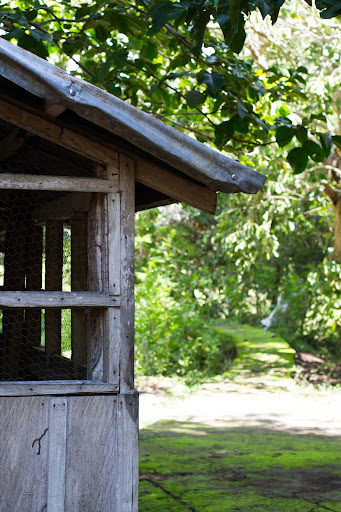 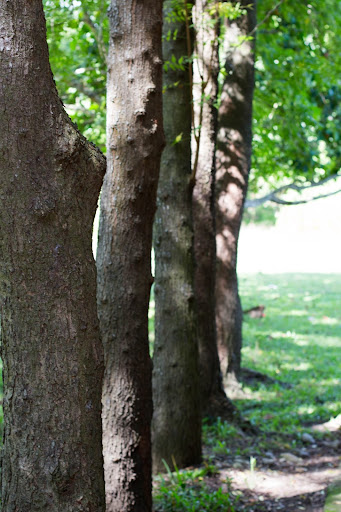 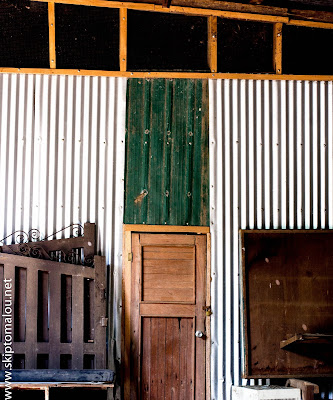 The serene surroundings make me appreciate life in its simplest form... 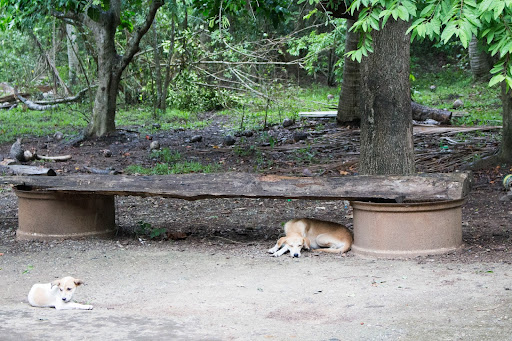 And as soon as the temperature reaches 230 degrees F, it has reached its gelling point. 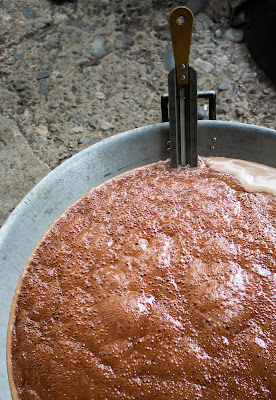 Or they use the ball test:  drop some jelly in a bowl of water, if the jelly forms a ball it's time to stop boiling but if the jelly spreads, continue to simmer the mixture 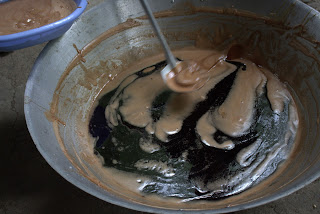 then pour them into jars... 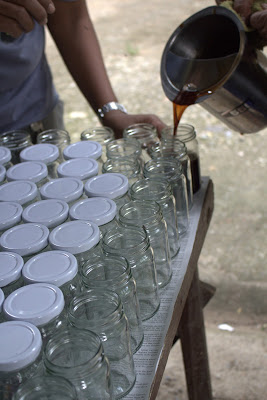 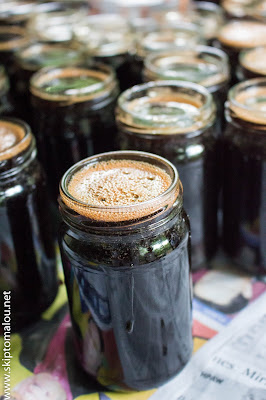 then skim off any remaining bubbles... 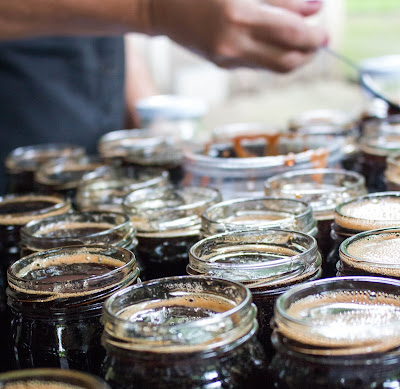 Now its ready for sterilization... 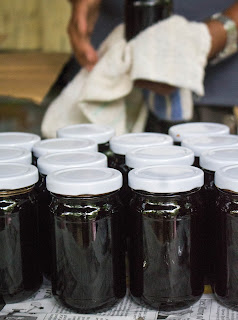 Soon enough, these sweet bottles of guava jelly will be distributed among friends and relatives...  and each bottle will bring smiles and joy.  Because they know that this is a heirloom recipe passed on to generations from more than 60 years ago.


For me, it is a sweet experience to be on the farm: being able to scoop a spoonful of freshly made jelly onto warm bread; being able to partake in guava jelly making with the crew and being one with nature. Sweet memories indeed... And the charm never wears off being at the farm. 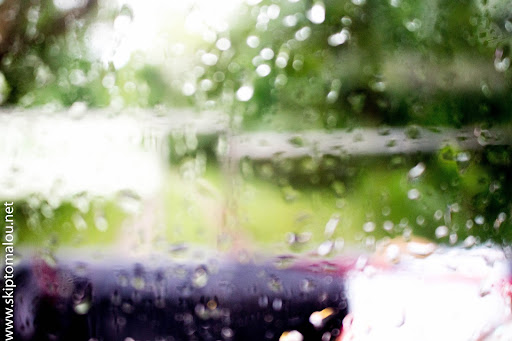 Thank you Tita Bess for the sweet experience. 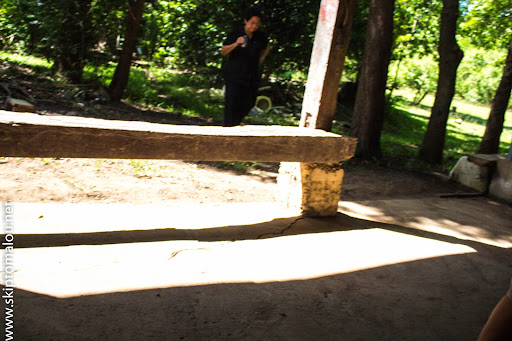 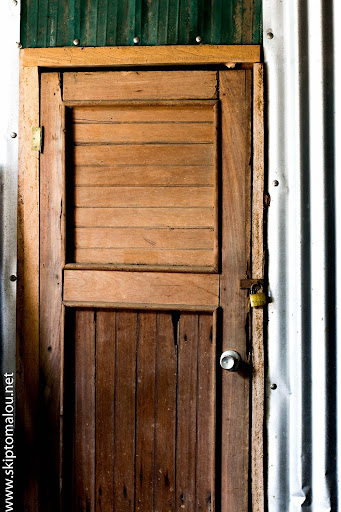 I  told  you in my last post, how ecstatic I was being featured in three magazines in August right? But September just kicked in and it gets more exciting! You see,  I'm blushing as I write this post.

For the September issue of Feast Magazine  I am featured as one of the five STL bloggers talk about their favorite gadget and share a recipe (of course) on the article Go Gadgets Go,  What's more thrilling is the fact that I am featured twice, as I am also on Feast TV, (launched in April and is  Emmy nominated on its maiden show).

I am sharing with you the video clip here but before we do that, allow me to thank Liz Miller, the managing editor of Feast.  When she initially emailed me regarding the article in June, I was ecstatic. After a series of emails and a meet up, I then got another email from her, saying that I will also be featured on Feast TV too. Whoa. I was floored because I know that it's going to be huge. I also would like to thank the video tandem Hannah Radcliff and Edward Calvey, if you watch the show, you'll be impressed at their work, and I mean REALLY impressed!  Also Kristin Brashares for making me at ease with the camera.  I guess the team's energy infected me with calm-ness and it made the whole experience really FUN!

A special thanks to my good friend Ralph Cordova, who is a professor (in his normal life he says) but is also the creative force behind Verdura Botanica,  He is the reason why I was oozing with self confidence, as he designed my diva-usque apron! (He designs and makes leather bags, crafts soaps, I tell you he is multi talented and I'm so lucky to have him as a friend-- hihi).

So here's the clip and oh, btw it will also air on KDNL ABC St Louis on Sunday, at 9:30 am.Please click here to watch. 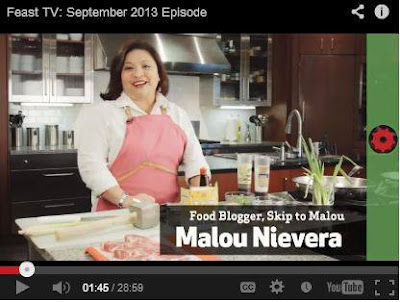 I shared a recipe I developed using my favorite gadget, an immersion blender.  I used two of my favorite ingredients: tamarind and lemongrass. 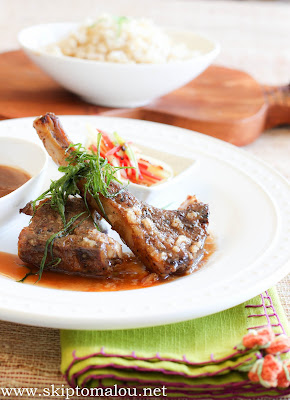