Don't let the overcast skies fool you. Even though it feels like summer has been eluding us in California, summer is definitely here. Growing up in the northern tip of the Philippines, summer was best described in one word: HOT! So it makes me cherish this mild and very comfortable weather!

The usual signs of summer are also present, including the sound of my kids taunting and laughing with each other -- even to the point of annoying each other, obviously a sign of summer boredom haha! I really enjoy this time of the year.

Summer brings forth memories that defined my youth.  And like my 3 kids' upbringing, growing up in a large, tight-knit family had the same benefits: playing, taunting and yes, laughing and goofing around. Our usual question to our mom was "what's for merienda (snacks)?", and I remember we would always request for "dudul" (our  version of maja blanca - a dessert made of coconut milk and corn starch).

The aroma from making latik (which is a reduction of coconut milk) teased our nostrils and titilated our pallates... I call it kitchen seduction since all of us always found our way to the kitchen just to check whether the treat is almost done. The hot afternoon eased us into an anticipation of something good.

There were times when we would request for "dudul" but my mom complained that it was too tedious to prepare. I can't blame her, for extracting coconut milk the traditional way entails a lot of work, even now. Luckily, we had a good alternative back then. Long before there were fast food chains that dominated the food business, we knew a nice lady, whom we called Dideng, who walked around town, carrying with her a "bilao" (basket tray) on her head. We would sit and wait by the porch for her to pass by. And when we saw her, we would run towards her, carrying our own serving trays. I remember how the "hot" steam from the sun-baked asphalt had felt on my feet after running barefoot towards her; I was so carefree and unmindful... Even when my Mom screamed that I should wear slippers and watch out for tricycles (local taxi cabs, a motorcycle with a side car), I just heard the dudul beckoning!

Making majah blanca recreated those summer memories.  While I was cooking the latik, all my kids asked me, "What are you cooking, Mom?" I smiled as I remembered those days when I could not wait to have a bite of dudul. Recreating something that I experienced when I was little warms my heart:  I can recall the exact feeling when the same aroma comes from my kitchen. The only difference is that I don't have to extract the coconut milk the hard way anymore; I could conveniently just open a can of coconut milk to use. 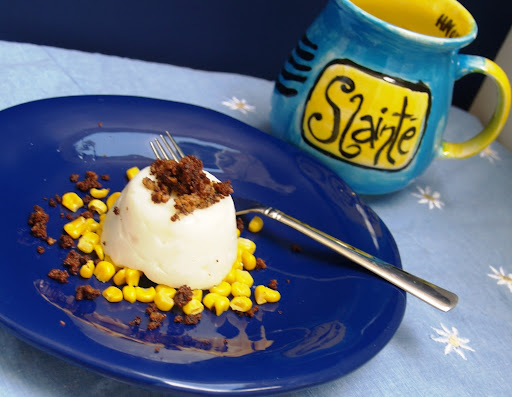 First, we need to make the latik.  Latik is the residue formed from the reduction of coconut milk.  Just pour the whole can of coconut milk in a thick saucepan.  Bring it to boil and continue to stir until most of the liquid has evaporated.  The milk will begin to change its color to slight brown and begin to solidify.  At this point make sure to turn your fire to medium low as to avoid over-cooking the latik.  This is the part when the sweet smell surrounds the house.  An oil-like layer will form as a result of the reduction.  Continue stirring, and remove from heat when residues form and had turned brown.   Separate the latik and save the coconut oil as well.

Now we're ready to make the maja blanca.  Pour all the ingredients together: coconut milk, coconut oil, condensed milk.  Let it boil.  Add the corn starch mixture to thicken, stirring continously.  Pour into a mold.  Level it with a spatula.  Let it settle. 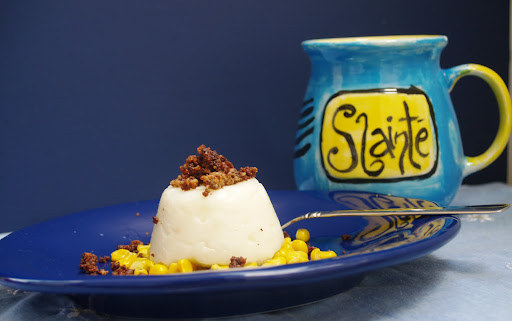 To serve:  Unmold the maja blanca, top it with latik.  And in my case, I wanted to add more corn into it so I sprinkled more corn... Btw, do you like the mug in this post?  My daughters made that for me,  and as the mug suggests  SLAINTE!
Posted by SKIP TO MALOU at 5:56 PM