The Adventures of the American Adobo 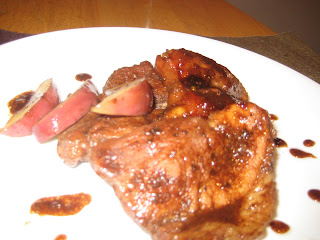 A family friend from home, Cecil, came to San Diego to attend a convention for the American Society of Nephrology (ASN) over the weekend. We met him (yes, Cecil is a he) at his downtown hotel to pick up a "care" package, a.k.a. "padala" or "pasalubong", from family and friends back home.

At the hotel's busy lobby, I was so excited to see a familiar face amongst a veritable sea of people. He was obviously attending a convention, as the huge badge hanging around his neck would attest. I saw him lugging along a huge suitcase and a paper bag as he was walking towards me. Surprised, two possibilities immediately crossed my mind: a.) He is giving up his luxury suite hotel room to spend the weekend with us to have some "bonding" time, or b.) My family and friends have sent me a ton of gifts from back home, thus the need for the suitcase to transport it. I was more concerned about the latter, I thought to myself, “Oh no my mother over did it again”! Flashback: A few years ago, a family friend asked my mom if she wanted to send some things for me upon his return to the US. He told my mom that he had space available as he was not bringing home much. My mom sent me a box full of flavored century tuna and bottled gourmet tuyo. Although I love Century Tuna, it was embarrassing because apparently my friend’s back ached carrying that box! So I thought... hmmm this must be another century tuna package. It turned out the answer to my question was: neither of the above. I found out that the lining of Cecil’s luggage was broken so he had bought a new one and he was wondering if I could still use an extra suitcase. Well the suitcase looked great, so I decided to take it with me.

We took him around San Diego visiting Coronado Island, Balboa Park and the seaside town of La Jolla. As the evening drew near, my hubby and I asked where would he want to go for dinner. We offered him different choices... Chinese, Italian or American cuisine. His choice: Malou's cuisine. He mentioned how he was craving for my home cooked meals, especially my adobo. So if it wasn't much of a hassle, he would prefer heading to our house for a genuine home cooked meal and also to see my kids. After all, he hasn't seen them for more than 5 years. Before coming over here in the US, our families had frequent dinners/trips and did so many things together. Our kids were also the best of friends. He said he missed my cooking. He reiterated his earlier request, saying that he doesn't mind if I cook him my version of "adobo"

There are so many versions of adobo, it depends which region of the Philippines you come from. But my versions of adobo, since the time I left the Philippines, are continuously evolving. Actually, I think it depends upon my mood: I have the “oh so glorious garlic” adobo, which my sister truly loves, and the asim (sour) adobo which, has a lot more vinegar than the usual adobo, which my mom loves. (And oh I could vividly recall how she would instruct our cook to go easy on the soy sauce as she wants more vinegar on it). And yes, adobo was one of my mom's "impromptu dishes” as it's so easy to make. The latest version I have learned to love is the Hernandez Adobo, which is a friend’s recipe sent to me via Facebook. It also has lots of garlic but is uniquely orange in color. It is oh-so-delish as well.

I took the cue from my guest’s requests: my menu tonight will be pork adobo, chicken and vegetables ala pinakbet. So in my head, I was improvising, or rather “impromptu-ing”. I know that I have marinated chicken in the fridge (Impromptu Diva TIP: I marinate meats and chicken right after grocery shopping. It saves me a lot of time and it comes in handy when I need to don my IMPROMPTU Diva apron).

To buy myself time, I suggested that Cecil and my hubby go to Best Buy while I make dinner. I then instructed my daughter at home to load the marinated chicken in the oven. My daughter’s help save me some time since baking the chicken requires more than 30 minutes. As we got home, the smell of the chicken baking emanated from the kitchen (thanks to my kids who could do things just as I ordered). I instinctively took out the pork from the fridge, and while he suggested "adobo", I thought somehow of turning my adobo into something "American", as I saw some red apples sitting on the fruit basket. The result: Cinnamon Apple Glazed Pork Adobo. He also mentioned that he cared for some vegetables ala pinakbet, so I grabbed some zucchini and made Zucchini in Raspberry Vinaigrette. It had the same color as pinakbet but quite a different flavor and texture. Another impromptu tip: always have some seafood and fish in the freezer, as these are the easiest to prepare. I grabbed a pack of tilapia fillets and proceeded to prepare Naughty (nutty) Tilapia.

Dinner was ready as soon as the big boys arrived from the big boys store, grinning with their 'big boys' smile. It was an enjoyable, no fuss dinner, easy to do and easy on the budget as well, very impromptu-esque indeed.

Combine all the ingredients (except for the pork) and let it simmer. On a different pan, brown the pork then add it to the simmering mixture. Let it cook until it gets dehydrated or until the sauce begins to thicken. As soon as it thickens, drop the sliced apples. Make sure the glaze covers the apples as well as the pork. So simple yet so delish!

Marinate chicken using the 4 ingredients. Preferably marinate it overnight. Cover and bake the chicken at 375F. After 40 minutes remove cover and shift it to broil. (I put it on high) This will take about 8-10 minutes each side. Make sure not over cook it as it will make your chicken dry.

In a pan, brown the garlic in butter. Set aside. Using the same pan, make a roux by browning the flour. Add the chicken stock and drippings. Season to taste with salt and pepper.

Sprinkle the toasted garlic on the chicken and gravy. That will give your simple chicken the extra zing!.

Season the tilapia with lemon, salt and pepper. On a bowl mix the parmesan, celery flakes and mayo. Top it with crushed nuts. (any kind will do!) Broil the tilapia for about 10 minutes or until cooked. Again be careful not to burn the dish.

Directions:
Chop the Zucchini tomato and onions. (You could add olives if you prefer but at that time I didn't have it available). Add the mushrooms. Top it with minced garlic. Drizzle the Raspberry Vinaigrette Dressing and top it with feta cheese. Bake it for about 10 minutes. Voila Done!

Spread it on the fillets. Top it with crushed nuts. Bake for 10 minutes. And the tilapia is ready for a bite.

P.S. Stay tuned for future blogs wherein I will include the more traditional adobo recipes, and if my friend Jenny agrees, the Hernandez adobo that I mentioned.

Also, please check http://www.flickr.com/photos/impromptudiva/ for more photos. Thanks!
Posted by SKIP TO MALOU at 3:44 AM

Email ThisBlogThis!Share to TwitterShare to FacebookShare to Pinterest
Labels: A Taste of Home (Filipino and other Asian recipes), around town, Birds of the same feather (poultry dishes), friends, pork dishes, seafood, side dishes